Home / This is the true story of Eros at Piccadilly Circus 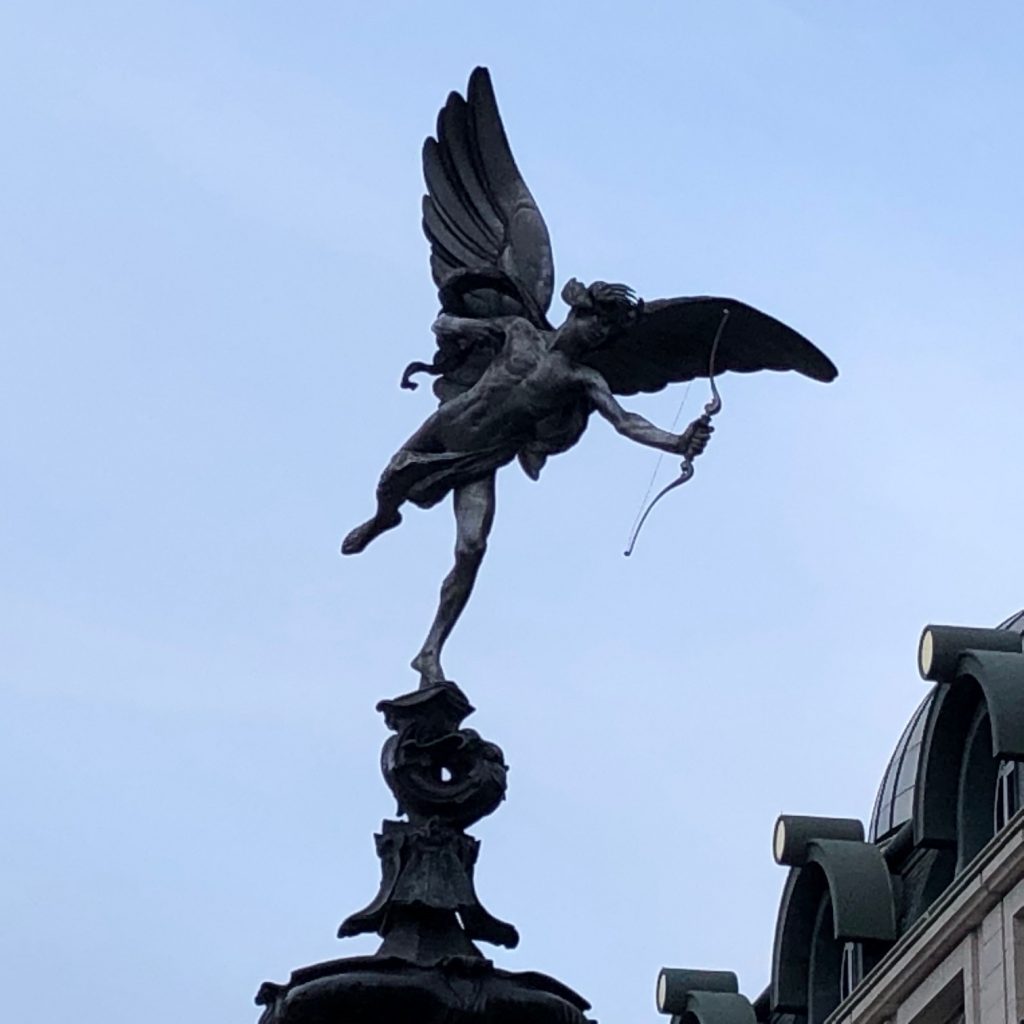 Every evening in May 2021 a video by David Hockney covers the whole LED billboard. It starts at 8.21pm each evening and lasts a couple of minutes. In it the sun rises, spreading its rays and brightening the dark landscape. It is called Remember You Cannot Look At The Sun Or Death For Very Long. it bathes the area around it in warm, bright, yellow light. It feels apt for our times. It reminds us that the Covid 19 virus is going to be defeated (we hope) by vaccines. To see the video check out my Instagram post of 13th May @gailtouristguide.

While waiting for Hockney’s video to start I took a closer look at the sculpture we call Eros. It is one of the iconic symbols of London and it is covered with sculptures of children.

Officially the monument is called the Angel of Christian Charity. Alfred Gilbert who sculpted it said it depicts “blindfolded Love sending forth indiscriminately yet with purpose his missile of kindness”. Unveiled 1893 by the Duke of Wellington it is dedicated to Lord Shaftesbury. He campaigned for the rights of children.

The sculpture was designed as a fountain. With a little imagination you can see how a row of small basins all round it should be filled with water. The water would have cascaded down to the next tier. Underneath each of these basins is the face of a solemn looking child with its’s eyes closed to stop the water getting in.  Above them is a row of children sitting with fish. They look like they are reading stories to the fish. You get a completely different view of the angel on top from here.

There should be a large basin around the base but the builders made it much smaller than planned. As a result, water splashed out onto people standing nearby. The fountain is rarely turned on.

Alfred Gilbert (1854-1934) was so upset by the disastrous change to his plan that he refused to come to the opening ceremony. He lost a fortune with this commission because his quote was based on him being given cheap, melted down old gun metal to work with. The metal was never supplied so he had to improvise. He made the statue of the angel on top with cast aluminium. It was a new material and cheaper than the bronze he used for the base.

To add his disappointment, eight drinking cups attached by chains around the bottom of the fountain were stolen. Six disappeared within a day of the inauguration.

Gilbert was a progressive artists of the late 1800s and was highly respected. He sculpted this statue at the beginning of the Art Nouveau movement and you can see its influence on him. Unfortunately, he was a poor businessman. He got into debt and upset people, including the royal family, because he did not finish the work they commissioned.

Gilbert’s rehabilitation came in 1826 with his memorial to Queen Alexandra. It is on the garden wall of Marlborough House where she lived.  Gilbert knew Alexandra personally. She had supported him when times had been hard. His sculpture of this much-loved queen consort touched people’s hearts when it was unveiled in 1832.

Northwards from Piccadilly Circus and Eros is Shaftesbury Avenue. The road was created in 1886 by widening narrow streets that cut across a huge slum area. Like Eros, it is dedicated to Anthony Ashley-Cooper, the 7th Earl of Shaftesbury (1801-85).

Born into an aristocratic family, he was brought up by the servants because his parents had little interest in him. His life at school was not much better.

He was a devout Anglican and wanted to do what he could to help the poor. Before inheriting his title from his father in 1851 he joined the House of Commons. He was a great orator and is best remembered for his campaigns on behalf of children.

In 1833 he introduced the Ten Hours Act. It limited the working day of a child under the age of thirteen to nine hours. The bill was opposed by many politicians who owned or knew owners of factories employing children. It finally became law in 1847.

In 1842 Ashley-Cooper introduced a bill to stop women and children working underground in coal mines. Women and children were paid less than men so the mine owners were happy to employ them. Six years olds spent 11 hours underground opening and closing air vents as coal trucks hauled by older children and women were pulled along the mine shafts. The Mines and Collieries Act passed, largely due to Ashley-Cooper’s speech in favour of it. One point he made shocked people more than the idea of women children doing hours heavy work underground. This was that in the heat of the mine the women were stripped down to the waist like, and alongside, the men. The Act banned all females and boys under 10 years from working underground in the mines. They were still employed above ground to sort the coal and remove stones.

The other group of working children he tried to help were the “climbing boys”. Chimney sweeps employed children to climb up chimneys and sweep out the soot. Most of them were boys but there were some girls. They were aged between 5-14 years. Their parents had either abandoned or sold them to the sweeps. Workhouses handed over boys as “apprentices”. They were poorly fed to keep them thin. This was to help them get through small gaps. The children often fell down, or got stuck. The creosote clinging to the inside of the chimney could catch fire. The soot destroyed their lungs.

Acts of Parliament had been passed as early as 1840 to ban this practice. The problem was they were not enforced outside London because there was no real police service in the regions. The Metropolitan Police Service was founded in 1829 but many counties did not have uniformed police until 1856.

More laws were made which threatened fines but they were ineffectual until 1875. Ashley-Cooper, now Lord Shaftesbury and in the House of Lords, introduced a new Chimney Sweepers Act. It meant chimney sweeps had to apply for annual licenses and this time the law against using climbing boys was enforced.

These were the first tiny steps in improving the lot of the children of the poor in Britain. This is why we see so many children’s faces around the Eros monument in Piccadilly Circus.

London is open for business now and I am looking forward to taking people on walking tours. TAP HERE to see some of the London tours I take.

CONTACT ME to talk about your tailor made tour or book one of my public weekend tours. On mornings in May the public tours are Artists Hampstead and in June the subject will be Stepney, the Real East End. 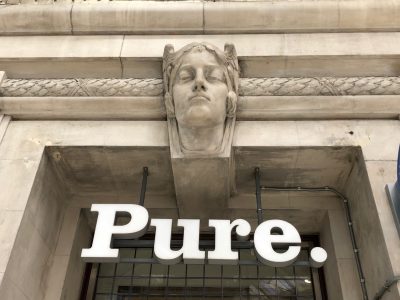 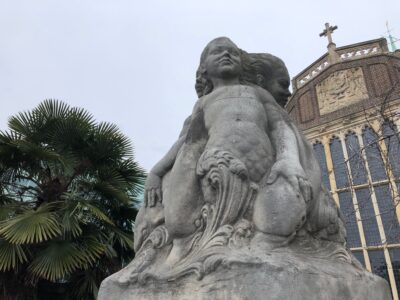