Home / Rock down to Electric Avenue 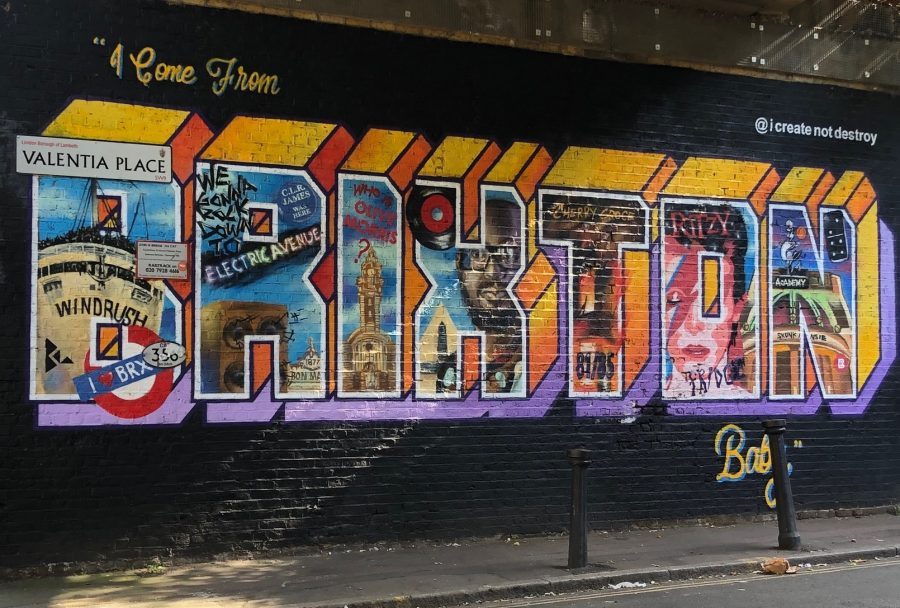 Stories and street art from Brixton

Electric Avenue is in Brixton. It is quite a trek from where I live. I have researched and taken tours there but it is not one of my regular areas so I was happy to be taken on a walking tour to see Brixton’s street art by my colleague, Angela Morgan.

The suburb is south of the river Thames in the London borough of Lambeth. The main road through Brixton is Roman and is thought to have led to a ford they used to cross the Thames.  The town’s name is thought to come from a stone which was used as a meeting point.

A tributary of the Thames called the Effra runs through Brixton. It is now underground. Rush Common in the town centre gets its name because rushes grew there on the river bank right up until C19th when Brixton began to be developed.

It was Vauxhall bridge being built in 1816 that brought the development. Middle class and wealthy Londoners built huge houses heathland here.

The arrival of the railway in 1860s meant lower paid workers had cheap transport into central London and smaller terraced homes were built for City clerks.

Brixton was the main shopping area and the most populous area of Lambeth from 1880s until well into the C20th. Shops attracted visitors from other areas of Lambeth, such as Bon Marché, Brixton Road in 1877,  Morleys in the high street in 1880s. Then the electrification of the lighting of Electric Avenue in 1888 (first street in London to have it).

Late 1800s the larger houses were being let out as lodgings for workers. Brixton was known as the home of music hall and entertainers because so many of them rented rooms here.

In the mid C20th Brixton was a working-class suburb of London. It suffered badly during WWII from bombing raids.

In 1948 a group of Jamaicans arrived in England on the Empire Windrush. They had been attracted by advertisements back home asking for workers to come and rebuild war torn Britain. There was a need for manpower in the building trade, hospitals and in factories. The privations of the war created a huge demand for goods after it finished and the 1950’s saw a boom in manufacturing.

When the ship landed at Tilbury lodgings had to be found and more than half of the new arrivals were brought to Clapham South Underground station. The tunnels under the station had been fitted out with beds and washing facilities during WWII for people to shelter in during air raids.  The Jamaicans had to pay a small amount for bed and board in the shelter

The Empire Windrush immigrants were invited to a civic tea with the Mayor of Brixton in recognition for their help during WWII. Many of those who came on the boat were ex-servicemen. The RAF alone had recruited 10,000 volunteers from the Caribbean.

The Ministry of Labour set up a desk in the shelter and within three weeks all but 8 were working. As soon as they got work, they left the shelter to live in lodging houses in nearby Brixton. The welcome they had received, easy transport to work and the large number of rooming houses in Brixton appears to be the reason why they settled here.

These were the first immigrants from the new Commonwealth (created 1948). The British Nationality Act awarded British Citizenship to everyone living in Commonwealth and Empire countries.

1948 was the start of a period of immigration of which led to tensions between the newcomers and the white residents. This was aggravated by a severe housing shortage after the war. Large estates were built but they tended to be self-contained with few through-roads which favoured criminal activities such as mugging.

An attempt to combat high crime rates was made by allowing police to “stop and search” anyone for little reason. The police targeted black males which led to race riots in 1981.

In 1985 more riots resulted from the shooting of Cherry Groce by the police. She was paralysed as a result. It was a terrible accident that happened when police raided her house looking for her son, Michael. He had threatened a police officer with a gun shortly beforehand and they thought he was in the house.  Michael was not there at the time.

In 1995 a black man, Wayne Douglas died in police custody at Brixton police station. A post mortem showed he died of heart failure but an inquiry also found he had been cuffed and held face-down four times. Trouble began during a vigil held outside the police station.

Brixton has been changing since the 1991 when John Major’s government announced a programme of regeneration for urban areas called the City Challenge. Lambeth council successfully applied for a grant to regenerate Brixton. One of its aims was to get rid of post war high-rise council flats.

Not everyone in the community was happy about changes to its make-up that would result from regeneration. House prices rose as Brixton became more attractive to middle class young people from outside the suburb.  One of the factors in the 1995 rioting was gentrification alongside the closure of facilities used by the existing Caribbean residents.

In 2015 and 2016 there were demonstrations to save businesses located in the arches under the railway that were going to be modernised which would result in higher rental prices. The shop keepers there were eventually evicted.

Pop Brixton began as a community project but it is now used more by tourists for its bars than by locals. Containers given to start-ups and many failed but one big success is the local radio station. Reprezent Radio broadcasts hip hop, grime and dance music. It has over 100 young presenters and works with the local community on training programmes in music and media.

Brixton is losing its African and Caribbean feel although the street market still has many stalls selling fruit, vegetables and fish for the Afro-Caribbean cuisine but it is not as crowded with them as before. Many outlets have been replaced restaurants and cafés run by other ethnic minority or young white people.

Gentrification began slowly and has really taken off since 2016. That was the year David Bowie died and a mural made in Brixton where he grew up.

The street art now seems to be around every corner and it makes Brixton a fantastic buzzing place to visit.

Much of today’s street art tells the story of the struggles of black people living in Britain.

The graffiti we came to see began to appear after the riot. In 1982 a mural on the back of the Brixton Academy depicting what are supposed to be school children by Stephen Pusey was funded by the local council.

More recently, Ghanaian born Londoner Neequaye Dreph Dsane aka  Dreph has created many murals. Beginning with Michael Johns, a man who is well known and liked locally. He looked after the public toilets here in Popes Road. Created by Dreph as part of the 2017 Brixton Design Trail.

He is also the artist of the Michelle Obama mural and the in 2021 of Marvin Gaye on the 50th anniversary of the release of the album Whats Going On? The sad thing is what he sang about is still going on.