Most of these walks last 1.5 to 2 hours. Some tour descriptions give suggestions for other sites to visit with your guide or on your own at the end of the tour.

Royal London  This walk visits the places where our kings and queens have lived, the Palace of Westminster, Whitehall Palace, St James and Buckingham Palace and tells the story of their lives and their reigns while at the same time passing some of London’s best known sites such as Westminster Abbey, Downing Street, Horseguards. If you are new to London or are interested in knowing more about the monarchy through the ages this tour is ideal.
To see what some of the monarchs looked like you might like to add a guided tour of the National Portrait Gallery to the walk. 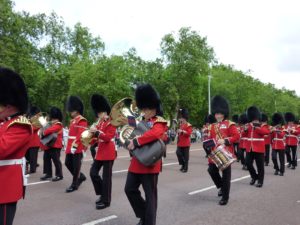 City of London  The commercial capital since London was founded 2000 years ago. The City looks ultra-modern but this is London where the old and the new live happily together and there are historical buildings and little lanes tucked in between the skyscrapers. We look at the workings of the City past and present. A visit of the Guildhall if its open is included and if you have a little extra time to spare, we can visit of the Guildhall Art Gallery (free entrance).

Mayfair  This has been a fashionable residential area since it was first built during the C17th and we will see some of the districts finest shops and arcades but there was also once a workhouse here. Mayfair has also been home to some notorious people such as royal mistresses, Russian spies, and much more.

Bloomsbury and Fiztrovia : Bohemian London  In the early C20th Bloomsbury was where well-heeled intellectuals such as Virginia Woolf, John Maynard-Keynes and TS Elliott lived (and loved) away from straight laced, respectable society. A few years later the bohemians, including Dylan Thomas and George Orwell moved slightly west to Fitzrovia, an area which had been the home of artists since C18th. The artists are still here but now work for advertising companies.

Inns of Court  Visits Middle and Inner Temple, Lincoln’s Inn and inside the Royal Courts of Justice. This is a chance to see the Oxford and Cambridge college style areas in London where barristers are based and to find out how the legal system has developed and how lawyers learnt their trade yesterday and today. It’s a fascinating part of London between Holborn and Temple underground stations just behind the main thoroughfares but a world away in its feel.
You might like to book lunch after a morning tour in C16th Middle Temple Hall. Tour not available at weekends, Easter or in August as the courts are not sitting then.

Holborn   This walk starts at Grays Inn and visits Hatton Gardens, where nowadays diamonds are sold but which was a real garden in Elizabethan days. The land belonged to the Bishop of Ely until he was forced by Elizabeth to lease it to one of her courtiers, Christopher Hatton. The tour visits St Etheldreda’s church which is the oldest Catholic church in London. Not available at weekends. 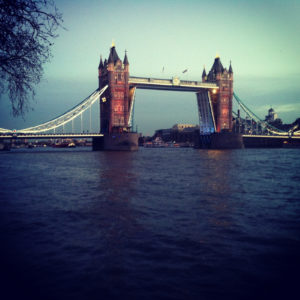 Dickens London  There are various routes you can use to follow in Dickens footsteps. I prefer taking a tour which starts at Borough underground station and finishes in the City (crossing via London Bridge). Dickens walked the length and breadth of London and wrote of what he saw. This walk talks about his life. It visits places he knew well and discusses the context of many of the characters he invented.

Roman London  This walk starts at the ruins of London’s roman wall near the Tower of London, passes the new underground museum in the Bloomberg Building which is due to open in summer 2017 and continues to Guildhall yard, the site of the Roman amphitheatre. The walk talks about life in the roman city and the disastrous fire during the reign of Emperor Hadrian. After the walk there is the possibility of visiting the Guidlhall Art Gallery or continuing with the Roman theme by visiting the Museum of London’s roman gallery.

Southbank  Starting at London Bridge station we walk along the riverside with views of Tower Bridge the City of London on the opposite bank. The walk then leads west towards the Tate Modern art gallery, passing Borough market, now a fantastic food market some days of the week, and a replica of Sir Frances Drakes ship, the Golden Hinde. It is possible to include a visit of Southwark Cathedral (entrance fee payable) where Shakespeare’s brother is buried and after the tour you could visit the Globe or the Tate Modern or perhaps cross the river to St Pauls cathedral using the Millennium Bridge.

Pub Tour  Meet at London Bridge underground station to find out how pubs developed, why they are so important to the British way of life, what makes a good pub, and what actually is the definition of a pub. We will see inside some of them en route but this is not a pub crawl, there is no time to stop for a drink, however you can return to any one of them after the tour to test the product, or have lunch in a secret gem of a wine bar where the tour finishes. (Not available on Sundays).

C19th Philanthropy   This visit starts at Holborn station. Holborn and Bloomsbury are where many public-spirited movements developed. We head north toward Great Ormond Street, the first hospital in Britain for sick children and to Coram Fields where the country’s first orphanage was built in the C18th century. It is possible to include a guided tour of the Foundling Museum (entrance fee payable) which shows how the orphanage was run. 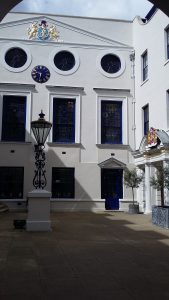 Blackfriars   The area derives its name from a Dominican monastery that was here which was one of the most important in London. The Dominicans wear a black “cappa” or hooded cloak over their white habit. After its closure writers like Shakespeare and Ben Jonson lived in the district. We pass Apothecaries Hall, one of the City Livery Companies. NB short walk – only 45 mins so combine it with something else for example St Pauls Cathedral or Shakespeare’s Globe. 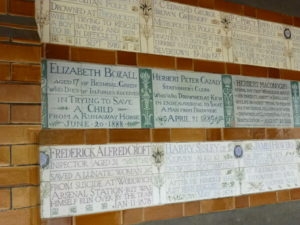 Smithfield   A stone’s throw from St Pauls is Smithfield and Charterhouse. 900 years ago this was where horses were bought and sold and monasteries thrived. It was an area of blood and gore, with a meat market and an execution site (the bodies were useful to the anatomy students of St Bartholomew’s Hospital). Charterhouse was the site of a Carthusian monastery, an order which began in Chartreuse, Switzerland. From January 2017, a visitor centre will open on the site of the original monastery church. This tour can include a guided tour of the church of St Bartholomew the Great (entrance fee payable).

Spitalfields   Always an area of immigration, first French Huguenots, then Jews from Eastern Europe and now people from Bangladesh. Evocative Huguenot terraced housing still exists and the streets are often buzzing with film crews. In recent years Spitalfields has become popular with tourists and street artists.
After the tour you might like to stay to explore the vibrant Sptialfields market.

Stepney  In London’s East End. We see where the Salvation Army began and visit the Ragged School Museum – where poor children were given a basic education and shelter by Dr Barnardo. There is a marvellous mix of buildings to be seen here and a thriving city farm. Some of the exhibits from the Crossrail archaeology exhibition 2017 were found in Stepney. Some of the location sites for the TV series Mr Selfridge and Taboo are in here.
Available Wednesdays and Thursday only and maximum 15 people because of the museum opening times and size. No charge for the museum entrance but a donation from the group is expected.

Wapping  A walk from St Katherine’s Dock (Tower Hill underground) to Shadwell (DLR). The story of the development of the London docks. We walk where the docks used to be and where ship cargo was unloaded. You will see how the area has been transformed since the docks began to close in the 1960’s. It is a fascinating area. We pass some of London’s oldest and most colourful pubs en route which you might like to return to after the walk. 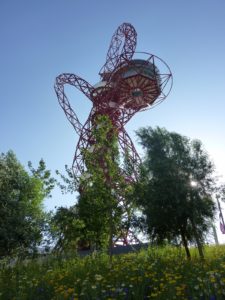 2012 Legacy   Starting at Stratford station. I remember when this was an industrial area that no-one would ever think of visiting and how it was transformed over a few years into the site of one of the most successful Olympic Games ever. Two of the key elements born in mind when planning the games were that they should be “green”, using public transport and eco-friendly electricity for example, and the legacy the venues would leave to the local people. This is an uplifting story which will warm your heart, and possibly tire your legs as the park is big and if you want to see it all, there is quite a lot of walking. At the end of the tour you may wish to spend some time in the attractive park that is part of the legacy, or take a swim in the iconic Aquatics Centre, see east London from the heights of the ArcelorMittal Orbit, or in Europe’s largest shopping centre.

Greenwich  Walking tour to find out about the history of Greenwich and seeing the main sites : the Cutty Sark, the fabulous exhibition at Greenwhich tourist office and the naval college. We will peek the Maritime Museum and the Queens House before walking up the hill in Greenwich Park to enjoy the views over London from Royal Observatory. Greenwich is like a mini-London with its classical buildings and lively weekend market.
(please note the Painted Hall is closed for refurbishment until 2018, and entrance to the Royal Observatory is not included).

Chelsea  Walking tour to discover the humble beginnings of London’s most expensive real estate. It has been the home of retired soldiers for 400 years and the tour will pass by the Royal Hospital Chelsea to hear their story. During the C18th the manor of Chelsea was bought by Sir Hans Sloane, the royal physician whose collections were used to found the British Museum and the Natural History Museum. During the C19th Chelsea was a quiet retreat from the hustle and bustle of central London for writers and artists.

Kensington  At one time another village outside London favoured by the wealthy, including the king, as a healthy place to live. How did the area develop? Who lived in Kensington? This is a circular walk from High Street Kensington underground station.

Holland Park  Meet at Holland Park underground station for a visit of the park. It covers 22 hectares and is laid out with wild areas, formal parterres and there is a Japanese style garden. The Princip family lived Little Holland House, their artist friends began to move into the area 1870’s. One of them was Frederick Leighton and the tour includes a visit of Leighton House art gallery (there is a charge the gallery entrance).

Notting Hill  At one time is was a muddy hillside off the toll road from the north-west into London. After WWII immigrants from the Caribbean were housed here which led to racial tension. During the 1960’s the residents held a carnival which is now one of the world’s largest. Music was everywhere and discs by Led Zeppelin and George Michael were recorded here. The film Notting Hill attracted people to buy and renovate property which has changed the character of some streets from working class to ultra-chic but Portobello Road street market has retained its bohemian atmosphere and is a magnet to tourists from all over the world. 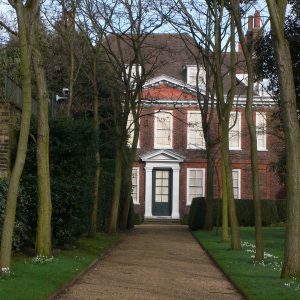 Hampstead  Many of London lost rivers rise here and the air and water was considered healthy in the days when London was beset by the plague. Quaint and village-like Hampstead has long been a favourite haunt of actors, artists and writers. We visit to the graveyard of St Johns church where among others, Constable is buried