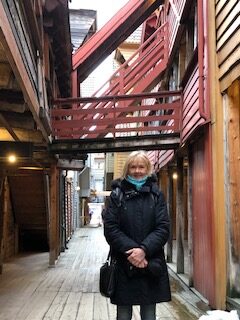 Every year I try to learn something new, this year because of Covid 19 I’ve been forced into embracing virtual reality. I am now on Instagram and this is my profile photo.

I was in Bryggen, Bergen in Norway in February. I loved Bergen; the fantastic Kode art galleries, the architecture, the wooden buildings where this photo was taken, the friendly people. We wanted to visit the Hanseatic Museum because the League once had an enclave in London. The museum is closed for restoration but its visitor centre and shop is now an old building in the centre of Bryggen manned by a fantastically knowledgeable young man.

The Hanseatic League were merchants who got together to trade. They began in Lubeck, then Hamburg merchants joined, agreeing to protect League members. The League spread to towns along the Rhine, the coasts of Germany, Scandinavia, the Netherlands, Russia, Poland, La Rochelle in France, East Anglia, England.

They built boats called Kogges that were ideal for carrying cargo over rough seas. The Kogge was developed from small coast vessels that already existed in Friesland. They could be up to 30m long, 7m wide and 5m deep, fairly flat bottomed and rounded in the middle to maximise the amount of cargo they could carry. At the stern is a castle from where the rudder steered the boat and they had one mast with single sail, larger Kogges might have a castle both ends.

The design was copied in England to produce the Trading Cog. This is the type of ship that went to Bordeaux to bring back wine until 1400s when more powerful vessels superseded them.

1266 Henry II of England gave the League a Charter which meant they were exempt from many of the taxes in London. Their cheif imports to England were fur, timber, resin, wax and honey which were mainly exchanged for English cloth. By 1320 they were living in the City of London, right next door to the wine merchants from Bordeaux and in the heart of the medieval fur trading sector of the City. Fur was used as a status symbol as well as to keep warm and was extremely valuable. The German community was called Steelyard. The name may come from imports of metal ore from Sweden or from the yard-long metal beams that were used as portable scales for weighing goods.

Steelyard was surrounded by a wall. Inside only German was spoken, products consumed came from Germany and to avoid disputes with the locals, fraternising with English women was strictly forbidden.

Disputes did arise however because London merchants wanted to same concessions in the Baltics that the Hanseatic League enjoyed in London. The League had developed a monopoly there and were prepared to fight to keep it. Eventually in 1597 Elizabeth I acceded to the English traders wishes and expelled the Hanseatic League.

The League owned the land at Steelyard until 1852 when they sold it to the South Eastern Railway Company who built Cannon Street Station on the site. Street signs and a bar called Steelyard remind us of our links with them.

Spring is on its way

Lights are not just for Christmas, art in Walthamstow