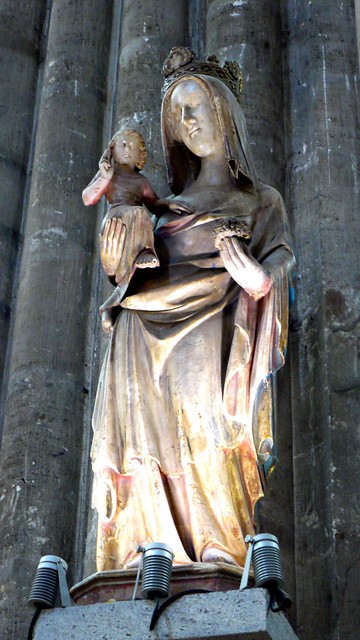 Continuing on from last week’s blog, my favourite example of contrapposto is a little alabaster statue in St André Cathedral, Bordeaux. She is called Notre Dame de la Nef.

She dates from 1500s and is made of alabaster. This stone came from Nottinghamshire in England and was used as ballast for the ships travelling to Bordeaux to bring back wine. It was carved in France and is used in mainly of the churches in the region. The alabaster was painted and there are still traces of the colour. She was found in the cloister in 1628 and became the centrepiece of a chapel in the cathedral dedicated to the Virgin Mary where pilgrims prayed to be cured of their illnesses. She’s quite small and she stands to the right of the altar now. She’s very unassuming in her beauty.

She’s lovely to look at and she reminds me of the links between London and Bordeaux and why I like to guide in both places. One of these links is the wine trade.

Bordeaux wine is the best in the world (OK I might be biased). The wine makers concentrated on their job. They sold the wine to merchants in the region. Many merchants had sons who lived in London and handled the business from that end.

Known as “Gascons” in London, they were allowed to live and work in a designated area on the banks of the Thames. Normally foreigners could not live and work in London but we made an exception for the wine merchants. In those days it was common practice in many towns in Europe to exclude foreigners although that sounds terribly racist now.

Ships were sent twice a year from England to collect the wine. Merchants were often paid in goods that they could trade rather than cash, for example English wool which was highly prised in France because of its excellent quality. Wool is lighter than barrels of wine so ballast had to be sent on the ships leaving England.

What’s on the roof in Whitechapel?

Do you wear a face mask?