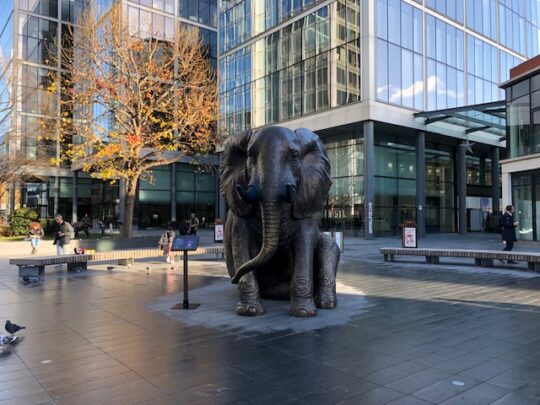 This statue of an elephant caught my eye when I was walking through Spitalfields Market in 2020. I went closer to snap it and discovered that sadly, it is there to remind us that elephants are still being killed for their tusks.

As I walked around the market area I saw lots of statues of baby elephants. The series of bronzes by Gillie and Marc is called The Orphans and was erected by the Sheldrick Wildlife Trust. The sculptures were inspired by real baby elephants whose mothers have been killed by poachers for the ivory trade. Orphaned baby elephants and rhinos are being cared for in Kenya by the Trust with the aim of protecting their habitat and eventually returning them to the wild. To learn more about SWT and to help click on https://www.sheldrickwildlifetrust.org

Gillie and Marc Schattner are Australian artists who specialise in sculptures of animals and of humans with animal heads. Two of these animal head sculptures, a male dog-head and a female rabbit-head sitting and drinking coffee, arrived in Spitalfields in 2017. They were joined by the dog-man and rabbit-woman on a Vespa and side-car last year.

Gillie and Marc have had work exhibited in many public spaces in New York, Melbourne, Sydney, Singapore, Shanghai and Beijing and here in London in Canary Wharf so you may well have come across them yourselves.

Spring is on its way

Lights are not just for Christmas, art in Walthamstow